Contributors to Now Write! Science Fiction, Fantasy, and Horror will discuss craft in a way that goes beyond the usual writers’ panel.  Our panelists will speak candidly about their own writing and share their favorite tools.  Be inspired by Kim Dower’s encouragement to capture material from you dreams, learn Michelle Newman’s secrets on how to effectively ground fantasy in reality and have fun with Derek Taylor Kent’s approach to character development.  We will do one of our guests’ exercises during the event, so bring a notebook, pens will be provided.  Moderated by Now Write! editor, Laurie Lamson.

(“Steal From Your Dreams With a Twist of Fevered Writing” in Ideas and Inspiration chapter.)

Kim Dower is a poet with three collections: Air Kissing on Mars (2010), Slice of Moon (2014) and Last Train to the Missing Planet came out earlier this year (all published by Red Hen Press.) Her poems have appeared in journals including Ploughshares, Eclipse, Rattle, and Barrow Street. She has taught creative writing at Emerson College and teaches Come Dressed as Your Favorite Poem, at Antioch University Los Angeles.

(“FUNdamentals of Writing” in Memorable Heroes, Villains and Monsters chapter.)

Derek Taylor Kent is an author, screenwriter, performer and director based in Los Angeles. His award-winning book series Scary School (written under pen-name Derek the Ghost) has become one of the most popular new series for middle-readers ages 7 to 12. His bi-lingual picture book El Perro Con Sombrero came out August 18, 2015 through Holt/Macmillan and was a #1 best-selling new release. His first novel for an adult audience, Kubrick’s Game, is set for release September 26, 2016 through Evolved Publishing.

Other books include the award-winning educational picture book Simon and the Solar System and the magical adventure Rudy and the Beast, both available now. Derek also specializes in writing narrative scripts for Virtual Reality content.

(“Make It Real” in Scene Construction and Style chapter.)

Michelle Newman is completing her first historical fantasy novel, “Mistaken Knights,” while trying to save the world one kilowatt hour at a time: She moonlights for a company that creates green energy solutions for small and medium-sized businesses. 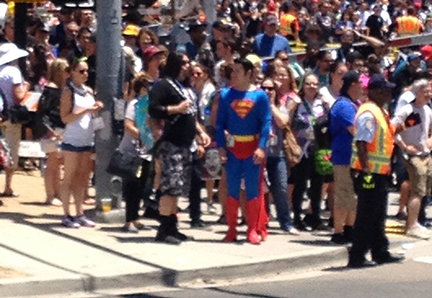 Comic-Con is a trip!

I first attended Comic-Con 2 years ago to link up with Now Write! Science Fiction, Fantasy, and Horror contributors: Michael Dillon Scott was on a wonderful panel about writing fantasy, the Winner Twins have their own booth and each contributed their own exercise.  That’s where I also met Ben Thompson who contributed the wonderful piece, “Diabolic Evil for Beginners” (in the High Stakes and Terror chapter.)

This year I was back for several days instead of just one afternoon and it was a trip!  The place was full of heroes, baddies and everything in between – see some pics below.  I got to see a hilarious Seth McFarlane panel and some previews of cool new shows Blindspot, Scream Queens, and The Expanse. 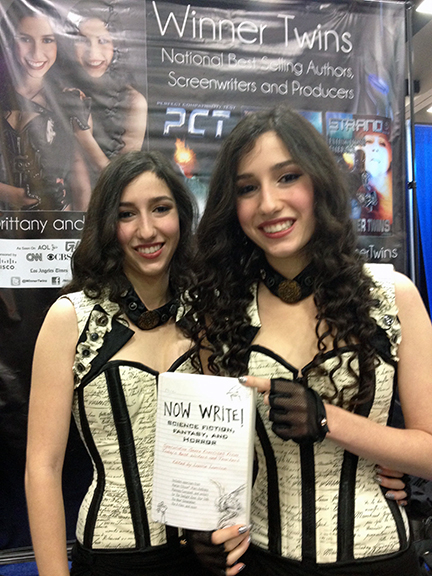 The Winner Twins (Brittany and Brianna) have been writing since they were 12.  They felt resigned to a disappointing life because of dyslexia, but their father encouraged them to start writing, telling them they could do anything if they made up their minds to it.   Now aged 20, they are extremely poised bestselling authors and teachers with a sincere desire to pass on their father’s encouragement to fellow writers. 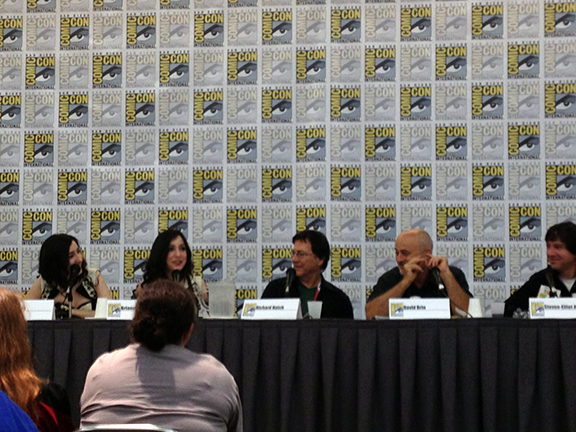 The Winner Twins hosted a terrific panel on “How To Create Your Novel” with legendary actor and bestselling author Richard Hatch, bestselling author, humanitarian and fellow anthologist Steve-Elliot Altman, Writers of the Future‘s John Goodwin and multi-award-winning bestselling author David Brin.  All these illustrious speakers had inspiring and helpful things to say, such as Steve-Elliot referring to the writing flow versus editing: