I recently received an email from a reader of Now Write! Screenwriting that brought tears to my eyes. I asked if he would be kind enough to share it and also something he wrote inspired by an exercise from the book. So here is his email, followed by his writing.

My name is Dominic Matich, a 27 year-old screenwriter from Michigan.  About a year and a half ago I  purchased Now Write! Screenwriting and it’s brilliant! I also listen to you on NetworkISA podcasts.
I made a commitment to myself, three years ago, when I got a kidney transplant, that I would dedicate my life to the career I love, screenwriting and dreaming for a living.  I’m in it for the long haul, I ‘m in it for as many years as I have on this earth.
I’m a boxing trainer as well so I use that discipline and take methods of training and use them in screenwriting, creating a gameplan for each week.  Part of the gameplan, is to do 1 exercise from Now Write! each morning to invigorate the “fire write” (the Zone when you can’t stop writing, look up at the clock and the whole day has gone by)  inside me and the fuel me for the rest of the day.
I just wanted to thank you and tell you how much that book means to a professional like me, who uses it every day and regards it as an absolutely necessary tool to succeed in the business of screenwriting.  I will use it before I win an Academy Award. I will use it after I win an Academy Award and I will use it when I’m regarded as the best, and I will tell everyone, “This book played a huge role in that! Every aspiring writer should have it!!!”   It is motivation and inspiration.
– Dominic Matich

Life is an intricate and unique prospect isn’t it? Challenges of immense proportions and loss that devastate the soul are the peaks of treacherous mountains that lie dead in the center of our pathways to peace and prosperity.

There I sat in my car, September 2007, facing the most horrific and seemingly impossible peak to climb, it seemed to scream to me, “make your own home be your gallows!” but there was no choice. Within an instant I was violently thrust into a collaboration of adrenalin, fear, a life gripping suffocation shock as I felt two 357 bullets savagely rip through my skin as if it was the easiest material in the world to penetrate.

Some say you can’t feel it at first, but my experience was as soon as the bullet hit the nerves, I felt it melting and burning its way through my body the whole time and long after. I scurried to take the wheel, turned the keys, shoved the gear into drive, and pressed the gas pedal with what felt like infinite pressure. I survived, I got out and I live to tell about it today, I live to say God saved me.

The worst peak though was yet to come, but was not a surprising intruder. As its presence ever lurked, as if I had seen the peak of the mountain named kidney disease which took my father and brother. It stayed stagnant in the distance as a nemesis and waited hoping to claim another victim. Shrouded in shades of mist in creeping clouds of impending doom, it was as vivid as an artist’s rendition of the killer creature mountain.

Finally in the beginning of 2009 the time had come where my feet had reached the beginning of the climb and what once was so distant, the monster now was close enough to touch. I began the climb and was put on dialysis at age 23 when my kidneys failed, and thank God for the gift he gave me of writing and a wandering imagination. I had the beginning parts of my novel Sypheria written out a year before, but now I had time. Time, oh precious time, the only thing that would either kill me or save me, obliterate me or deliver me.

You see, if you concentrate all your time on thinking and focusing on the terrible, your life and days are terrible, period. When you’re in an extreme situation like I was, you are guaranteed with an almost demonic tone behind it, a daily dose of terrible no matter what you do. You better spend as much time as you can making wonderful things happen, whether it is in reality or in your mind. I was lucky in a sense, I was able to watch my father and older brother before me go through 6 years of dialysis each and each receive a kidney transplant. I was, unfortunately and with all hesitation, intimately aware, acquainted with and adapted to the procedures, screams, and pain.

When it came my time (out of nowhere) I was sick and knew I was dying. The day I went into the doctors he told me, “Dominic, you’re in renal failure, we have to get you on dialysis.”

Now you see, I knew I could have taken a few days to become prepared but my immediate response was, “Let’s go now, let’s do this now,” even though I knew the next day my arm would have a shunt in it which resembled a disfigurement and tubes would be hanging out of my chest for the next six months where they will pull out your blood and toxins from one tube, clean them then put them back into you from the other tube. I knew that in a months’ time I would not be able to urinate again, and I wasn’t, until I got the transplant in September 2010.

So what could I do, how do you survive when all you see around you are the people with the very same affliction and they are withering away quicker every day, becoming weaker every minute, and knocking on death’s door every second.

I wrote! I knew I could either let time destroy me or use it to my advantage. By this time I had submitted my manuscript to American Book Publishing and they had signed me to their publishing house. I had such grandiose dreams, just like my father, but unlike him I was going to push until I saw those dreams and goals accomplished.

Dialysis was every other day for four hours, along with the painful procedure itself.  It was excruciating to say the least but I was smart. I knew I had a hard time sitting still for a long time; this forced me to do so. So I wrote, and before I knew it, I had an incredible manuscript and now I have an incredible book coming!

Since my transplant, my deliverance, and meeting my Savior I have made sure to keep a promise to myself that no matter what happens to me in life I will overcome. I have overcome nightmares that you’re in while you’re awake, and when you wake up from dreams you’re right back into the nightmare. I have seen great men and weak men fall. But the thing I’ve seen that might be the most precious resource on earth is our dormant dreams, our outstanding aspirations. They can be your rocket fuel when you are stranded in the most desolate of places. They can be your anchor and sunset during the most tumultuous storms, and they can be you wings to soar over any and all of the highest peaks of hell’s mountains. Trust in God and in yourself and you’ll never go wrong.

Here is more information about Dominic.

Now Write! Screenwriting has been published in Chinese by China Renmin University Press Co. in Beijing.

Chinese filmmaker Jennifer Fen Tian has read it and loves it.  Now Write! Screenwriting promises to be a useful resource for aspiring screenwriters in China – including those seeking a deeper understanding of American perspectives on cinematic storytelling. 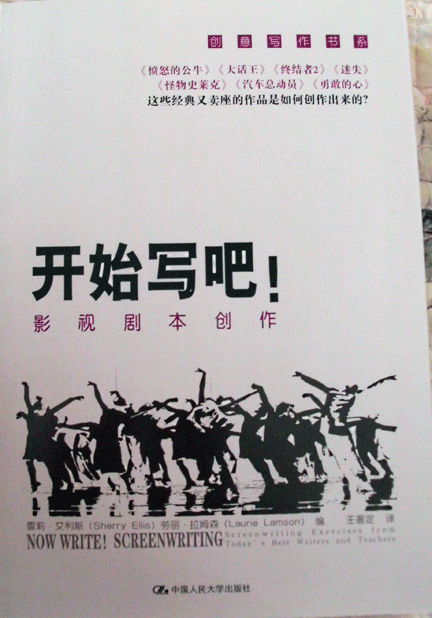 MONDAY, SEPTEMBER 19, 11AM IN SANTA MONICA – MUST SIGN UP THROUGH SHERWOOD OAKS and request Now Write! discount.

As part of a 2-day event ($119 per day), Sherwood Oaks Experimental College is hosting the next Now Write! Screenwriting panel on Monday, September 19 at 11am in Santa Monica.

This panel is part of a two-day seminar: Making It in Hollywood: Screenwriters, Directors & Producers Speak. The seminar offers an opportunity to hear from some of the top names in show business on how movies are created, produced and distributed. 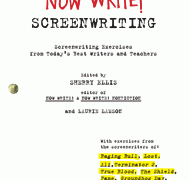 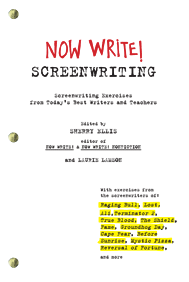 On hand to introduce the panelists will be Now Write! Screenwriting co-editor Laurie Lamson.

We’re planning an additional event with different panelists for Breaking Into Hollywood on March 16, also at the Writer’s Store.  Stay tuned.